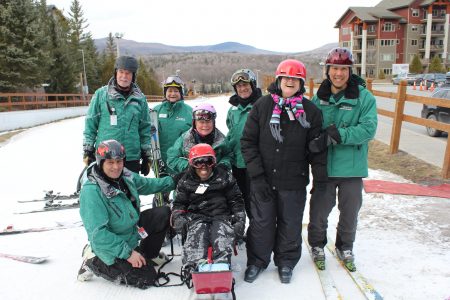 As ADAPT’s Exercise Physiologist, Shirley works on designing health and wellness, fitness, and athletics goals with our individuals each month. She offers a class where these goals are set for every six months by the class participants. Participants choose different sports that they are interested in participating in such as basketball, soccer, sky diving and skiing.

Six years ago, Shaniqua, who participated in this year’s ski trip for the first time, originally inspired Shirley to research where adaptive winter sports could be done. In her search, Shirley found the ADAPTIVE Sports Foundation, located at Windham Mountain. Ever since, Shirley has been working with the Foundation on ski trips and Windham Mountain to take small groups to the resort in order to experience winter sports activities, such as snow tubing, ice skating, snowmobiling, and skiing.

Upon arrival, there is a “meet and greet” with the instructors and other skiers, which includes individuals with and without disabilities. Everyone gathers around a fire pit to make s’mores and play ice breaking games. In addition to the adaptive sports, the individuals also participate and socialize at a pool party, pajama party, and a game night with other visitors at the Mountain.

“My goal is to make athletics exciting and make sports available to everyone, including individuals with disabilities,” said Shirley, ADAPT’s Exercise Physiologist.

“Each year I have a goal setting session in my Health, Fitness, Wellness, and Sports class to accomplish something that most people didn’t think someone with a disability can do. When I asked my group why they chose skiing their answer was that it gives them something to do that maybe their siblings haven’t done, and it gives them the chance to do something I never thought I could do myself.”

Shaniqua, who originally inspired Shirley to start the trips to Windham Mountain, signed up for skiing each year, but ended up not going as she felt a bit timid and not quite ready. After some more encouragement and a pep talk from Shirley, this year, she finally participated! As soon as she had her skis on, she was off and down the mountain, thoroughly enjoying herself.

As Shaniqua said, “I never ever thought I would be skiing, and here I am!”