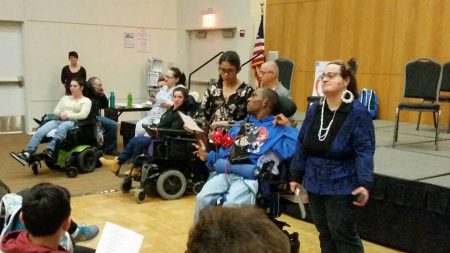 As part of the 9th Annual ReelAbilities New York Disability Film Festival, ADAPT was thrilled to participate in collaboration with community partners.

ReelAbilities is the United States’ largest film festival dedicated to showcasing films by, or about, people with disabilities. It was founded by Jewish Community Center (JCC) Manhattan in 2007.

On March 7th, Illuminart Productions put on the play, “Why Not?” featuring actors from our Staten Island program. ADAPT, formerly United Cerebral Palsy of NYC, joined forces with actors from the Staten Island JCC and Person Center Care Services.

“When Illuminart received funding for this project, they reached out to us,” noted Scott Feldman, Director of Staff Training and Development. “Randy met with a group at Port Richmond a number of times to write and prepare the skit.”

“Why Not?” was written by and starred adults with both physical and cognitive disabilities from the Staten Island community. Illuminart’s production was sponsored by NYC Department of Cultural Affairs & City Councilman Steve Matteo. The mission of Illuminart is to enable individuals of all ages to use the power of theater to portray and develop solutions for the challenges they confront.

The group met once a week in a writer’s room to develop the piece in preparation for the performance. Robyn’s contribution rang true to the sentiment in the room, stating “My teacher told me I could not go to college because I have a disability, but now I know it will not stop me and I know I have the right to go and do well in college even with a disability.”

Each performer spoke theirs lines on stage in a similar vein discussing why their disability did not prevent them from achieving their dreams.

On the night of the performance, there were nerves in the room, but Randy and the audience alleviated the pressure from each performer. Randy let them know to “just have fun” and the crowd was incredibly supportive throughout the night. After the applause, the group remained on the stage for a brief Q&A on what it’s like to have developmental disability. All the performers were proud of their performance and had a sense of accomplishment.

ReelAbilities Film Festival showcases films, conversations and artistic programs to explore, embrace, and celebrate the diversity of our shared human experience. The Festival brings together the community to promote awareness and appreciation of the lives, stories and artistic expressions of people with different abilities.