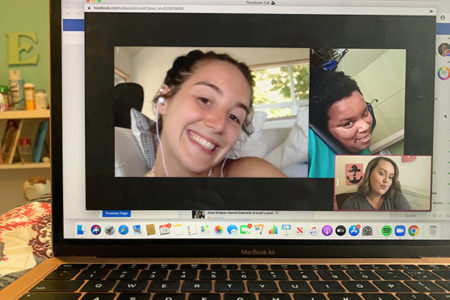 The Show Must Go On

ADAPT conducts virtual play rehearsals in preparation for their next production, On Metamorphoses.

ADAPT Community Network actors are at it again! This time they are gearing up for their next play On Metamorphoses, which is ADAPT’s Theater Specialists adapted from the classic Latin poem by the Roman poet Ovid. As everyone has been practicing social distancing during the COVID-19 outbreak, the Theater Department adapted quickly, which allowed the show to go on. Using video conferencing such as FaceTime and Skype, the cast and crew have been able to proceed with rehearsals.

Camila Kann and Gabbi Grenell, ADAPT’s Theater Specialists, finished casting ADAPT’s actors a week and a half ago. Most of the cast had participated in our previous production, Alice in Wonderland. PIX11 showcased this production in their Changemakers segment, which highlights those making a difference in the New York area and can be viewed here.

In addition to ADAPT’s experienced actors, there were also some newcomers who joined the team. The new cast members were inspired to audition after witnessing the special bond that the actors developed during their participation in the play. There are also a few professional actors without disabilities who will be participating in the production. The integrated cast will continue to work together in the upcoming weeks and will inspire each other to hone their skills further.

It’s crucial for the cast to be able to continue to rehearse for the play while at home. Participating in the play enables people supported to learn in a different way. It takes a lot of hard work and practice, but it’s also highly motivating for them. The actors are willing to put in the extra work because it is so rewarding. “They have expressed how wonderful of an experience this is and how important it was to them to be part of something big,” says ADAPT’s Director of Community Outreach, Peter Cobb. This is one way that ADAPT has been able to modify program services and continue to offer rehearsals during this time where there are so many unknowns.

Gabbi and Camila began having video calls with each actor to give an overview of the storyline and discuss character elements that will help prepare them for their role. As time goes on, they will start running lines and will facilitate group-rehearsals remotely. Most of the people in the cast have used video conferencing before, but for some, this was their initial foray. Deborah M. stated: “It was my first time using FaceTime. I had fun and enjoyed it! I will definitely like to do this again since we cannot go out at this time.” Markia C., who was familiar with using video conferencing, stated: “It was wonderful catching up on FaceTime. I was happy to see my friends happy and well!”