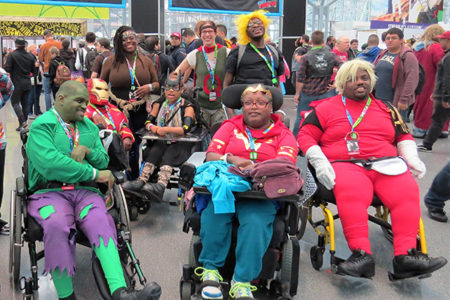 Last month, some of our individuals supported who create a comic book in an ADAPT comic book group dressed up as the superheroes and attended New York Comic Con (NYCC) at the Javits Center in Manhattan.  NYCC is the East Coast’s largest pop culture convention and the only one that takes place in the comic book, publishing, media, and licensing capital of the world—Gotham City.

Eight individuals supported attended, all active participants in the comic book group that Carly Okyle, Community Specialist, and Shaniece Frank, Program Coordinator for Community Outreach, started last year at Lawrence Avenue, in which they create a comic called The Adaptables. (They are currently working on their sixth issue.)  Jane A., one of the Comic Con attendees, dressed as Jamie Johnson, a character from The Adaptables. “She picked that out of any character she could think of, which made me feel incredibly happy,” says Carly. “I think the students are very proud of the work they’ve done with it so far.”

This was the second year that ADAPT attended NYCC, thanks to efforts spearheaded by Shaniece, who worked on logistics like securing tickets and transportation, and help from other staff, including Sandra Brathwaite, Habilitation Assistant, plus Taniqua Jones, Community Specialist, and Dayton Everett, Community Specialist, who helped make many of the costumes, and Carly.  Says Carly: “The individuals in our Comic Cosplay class, which is a course that focuses on designing creating and assembling of costumes, had some overlap with Comic Book class. They chose which characters they wanted to be based off of who they knew and liked.”

The eight Comic Con attendees took photos with Captain Marvel and received autographs from some of the talent who appeared on a panel. The group from ADAPT also met Wendy Xu and Suzanne Walker, who together created Mooncakes, a young adult fantasy graphic novel.

“I was pretty impressed by the sense of community that was there,” says Carly. “People were giving us compliments on our costumes as we passed and signed autographs for us. People were just genuinely friendly to complete strangers because we were all there to enjoy a fandom that we love.”