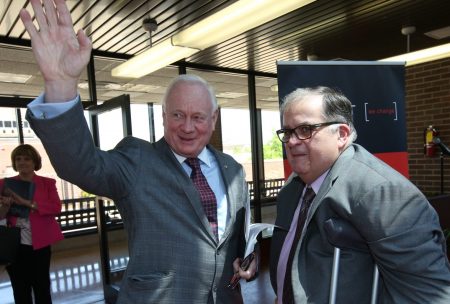 On June 1st, New York State Senator Martin Golden, a long-time friend and supporter of ADAPT and the disabilities movement, visited a program location in Brooklyn for a ceremony where he was recognized for his leadership role by both ADAPT and the Brooklyn Developmental Disabilities Council in obtaining the $45 million increase in pay for Direct Service Professionals in this year’s New York State budget.

This increase comes as part of the year and a half long bFair2DirectCare campaign, which was ardently supported by Senator Golden and other legislative leaders of the both Houses.

Senator Golden was welcomed by ADAPT CEO Edward R. Matthews, where he met with adults and children served at ADAPT as well as advocates, program staff, parents and other guests. In his remarks, Senator Golden stressed how he will continue to fight for the disability sector.

Golden noted, “I am from Brooklyn. I love a fight. I will always fight for rights of people with disabilities in New York.”

The funding comes on top of the increase provided to bring workers up to the minimum wage, with a total 6.5% wage increase occurring over two years. This announcement marks the first two steps towards the goal of providing direct care and other low-wage workers in our field a living wage.

The new budget includes a 3.25% increase in salaries for 100 and 200 code employees effective, January 1, 2018, with another increase of 3.25% for 100, 200, and 300 code employees effective 4/1/18.  These increases are in line with the $45 million per year State share, $90 million annually that was part of the living wage proposal supported by the coalition of leading disability nonprofits representing the bFair2DirectCare campaign.