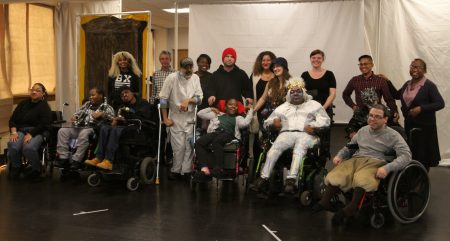 Individuals from the 5030 Broadway, 154th, and 137th day program locations demonstrated their acting talents in an adaptation of “The Lion, the Witch, and the Wardrobe” by C.S. Lewis.

Together with the assistance of Theatre Specialist Brigid Donovan, a group of talented individuals put on a remarkable performance in front of their peers.

The production came about when the Sacha Amry, Assistant Director at 5030 asked Joyce and Brigid to put together a winter themed play, using actors from different programs.

“I put out a call for auditions at all of the programs I work with, and asked interested actors to come to my regular theatre group,” said Brigid, who directed the play.

“During group, we held informal auditions, where we discussed three different characters, Lucy, the White Witch, and Aslan, and practiced saying a snippet of their dialogue in voices we thought those characters might have,” Brigid added. Following that, interested actors auditioned for parts.

The actors were instrumental in bringing the play together, as they collaborated to come up with staging that made sense and was motivated by their character’s lines and story.

The set and costumes were quite spectacular thanks to the talents of art specialists Joyce Jimenez, Natalie Reichel and Angel Acevedo.

“Joyce came up with the brilliant idea to use backlit projections, so that we could have several different backgrounds without having to paint giant canvases,” said Brigid. Joyce and Natalie then worked with individuals to create the digital backdrops and the canvas wardrobe. Natalie brainstormed costumes with the actors and other individuals before finding the costume pieces.

Kathleen Archibald, who played Lucy, thanked the crowd following the performance. “We got the script in November and started rehearsing in December, we did it!” said Kathleen. “We’ve been working long and hard on this.”

The cast recently took their performance on the road as well, performing the show at PSS Highbridge Senior Center.

Congratulations to the cast, creative team and all who supported the production!