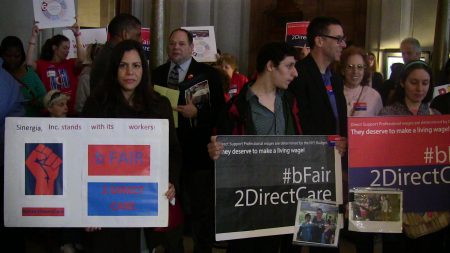 At the end of March, Governor Andrew Cuomo told the “bFair2DirectCare” advocates at his press event at the State Capitol that New York State will be fair to Direct Support Professionals (DSPs), and he kept his word. Supported by the leaders of the both Houses, this year’s budget includes an increase in pay of $45 million for DSPs. Governor Cuomo stood firm in budget negotiations, announcing he wouldn’t sign the bill unless it included the “bFair2DirectCare” funding.

This great news from the legislative leaders and the Governor comes as a result of a year and half statewide advocacy campaign conducted by Cerebral Palsy Associations of New York State (CP of NYS) and other developmental disability associations, including ADAPT Community Network. Staff, self-advocates, board members, and families worked tirelessly to make representatives in Albany understand the critical need for this funding. This funding will mitigate one of the key factors – salary – in hiring and retaining workers for positions in the disability field.

“The entire community of advocates in our state delivered one message to our elected officials- that our DSPs who carry out the myriad of responsibilities, ensuring that people with developmental disabilities live safe and fulfilling lives, are also cared for themselves,” said Amy Bittinger, Vice President of Family Support Services at ADAPT.

Assembly Speaker Carl Heastie, Senate Independent Democratic Conference Leader Jeff Klein, and members of the Senate Republican Conference, including Senate Majority Leader John Flanagan, all supported the campaign and commented on its effectiveness and positive impact on legislators’ final decision. The Governor noted that this funding would come on top of the increase provided to bring workers up to the minimum wage, with a total 6.5% wage increase occurring over the next two years.

This announcement marks the first of two steps towards the goal of providing direct care and other low-wage workers in our field a living wage. The plan crafted by CP of NYS and others calls for an additional $45 million investment by New York State in each of the next five years.