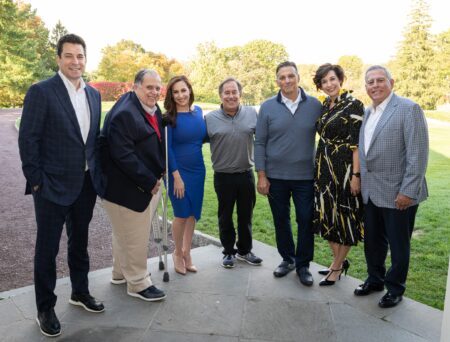 Annual Golf Tournament Is a Hole in One

On Monday, October 17th, a crisp autumn day, 150 golfers hit the green at Brae Brun Country Club in Purchase, NY for the 21st annual ADAPT Community Network Golf Tournament. The tournament, which was hosted by Steve Lacy and Teresa Priolo of Fox 5 News, raised a whopping $180,000 to contribute towards our programs and services for people with developmental and intellectual disabilities.

The beautiful fall day began with a breakfast overlooking the links of Brae Burn, featuring a cigar-rolling table and raffle ticket sales. After coffee, the golfers set out to their starting holes in a procession of golf carts. Next came a cocktail reception, then a silent auction, where signed sports memorabilia, paintings, and cigars were auctioned off. As the guests served themselves from the buffet, Steve Lacy and Teresa Priolo introduced speakers, drew raffle tickets, and announced the best scorers of the day. The 1st place team was Winograd/Kennelly/McCloskey/Wang—congrats!

Frank Grasso, CEO of TGI Office Automation, was the honored guest of the night. Frank’s father founded TGI over 50 years ago, and the company went on to provide office technology to ADAPT Community Network and other companies like Toshiba. We recognize and applaud Frank and TGI for always going the extra mile in leadership, commitment to ADAPT Community Network, and supporting those with intellectual and developmental disabilities.

Thanks to the support of our sponsors, the hard work of Golf Committee members Edward R. Matthews, Michael Berger, Valentino Galella, Jeff Weiss, and Alan Zack, and the generosity of our guests, the golf tournament was an extraordinary success. The funds we raised from the event enable ADAPT Community Network to empower even more people through our vast network of life-affirming programs.

“We thank everyone who supported this year’s golf tournament,” said Ed Matthews, Chief Executive Officer of ADAPT Community Network, in a statement. “We were delighted to honor Frank Grasso, Chief Executive Officer, TGI Office Automation. We thank Steve Lacy and Teresa Priolo for being such dedicated longtime supporters to ADAPT, and we also thank this year’s ADAPT Golf Committee.”

Thank you to everyone who organized and attended the golf tournament—we hope to tee off with you again next year!