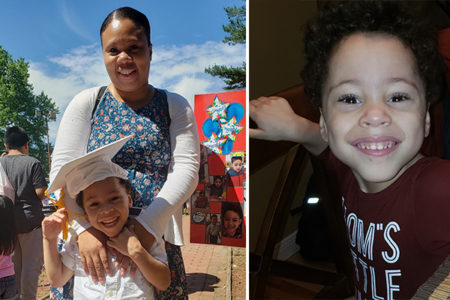 Adapting to Preschool: A Parent’s Perspective

The mother of a recent preschool graduate offers parents of new students her view of the support and resources she and her son Noah experienced at ADAPT Community Network.

School is back in session! ADAPT Community Network recently welcomed new students into our preschool, school age, and after school programs, designed to engage and educate children with special needs, as well as our universal pre-kindergarten and integrated programs, which offer a high-quality family friendly learning environment for children of all developmental levels. And no doubt, many of the new students were nervous, as well as some parents! Sherean Acevedo, whose five-year-old son Noah graduated from Bronx preschool in June, can relate. She recently sat down with ADAPT to offer her advice to parents and sum up how our staff shaped his–and her–experience and helped Noah achieve milestones.

Sherean admits she was quite jittery when Noah entered Bronx preschool in September 2016, at age 3: “I wanted him to have the best experience possible, because he deserves that,” but she was unsure of how Noah would handle being separated from her, taking a bus to school, and having to spend more time in a seated position. Said Sherean: “He could only sit for a couple of minutes. Before Noah went into school, he never knew what it was to sit in a chair.” Besides, at the time, Noah was not communicating much. The staff at Bronx preschool helped put Sherean at ease, especially director Beverly Ellman plus Noah’s teacher Patricia, the nurse, the social worker, and his physical, occupational and speech therapists: “They [the staff] knew I had an anxiety but they were able to speak to my insecurities and fears.”

Noah had a successful transition! The staff was also having a tremendous positive effect on Noah early on. They were “building where he was and taking it to the next level,” says Sherean. “Six months in, he started to use a word to tell me what he wanted. Before, it was jumbled up. Now he talks a lot!” Noah’s other achievements at ADAPT were many, including better posture and ability to sit for a long time, better behavior, and socially connecting with and helping others all on his own. Sherean considers the one-on-one therapy Noah received to be “priceless,” and his comfort level with his environment and acclimation to the routine catalysts for his progress. A development that especially stands out: “[He’s] learning how to move around, when people say he shouldn’t be.”

Sherean says another area in which ADAPT scored high marks is communication. The physical therapist Bonnie helped obtain equipment for Noah and kept in frequent contact with Sherean, and the other staff too would inform Sherean of “areas where he needed more help.” The staff had an open-door policy, and would send correspondence home in Noah’s backpack to keep her abreast of important information and offerings, including workshops featuring speakers on diverse, relevant topics. The workshops reinforced to Sherean that “there is a village out there who can help with your child,” including the Department of Education, social workers, internet searches on free resources, and more importantly, connecting with other parents. And she learned about advocating for your child, to never leave unsatisfied when working on getting the right services.

“The people who are in my corner have been phenomenal,” says Sherean, who admits she “didn’t even want [Noah] to leave” ADAPT! She feels confident that the foundation and confidence Noah received in preschool will help him succeed in his new public primary school: “He grew a lot here.” For more information about our education programs, please contact Project Connect at 1-877-827-2666 or projectconnect@adaptcommunitynetwork.org.