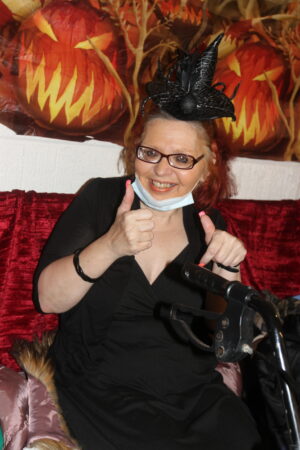 ADAPT Has a Spectacularly Spooky Halloween

What’s a better Halloween treat than a good scary story? Only a live performance of an original murder mystery play—something that attendees of ADAPT Community Network’s Lawrence Ave. Adult Learning Center were lucky enough to witness in person on Friday, October 28th as part of the Halloween Spooktacular event.

People supported and staff gathered in the auditorium of Lawrence Adult Learning Center at 11 a.m., chatting excitedly in front of the Halloween-themed stage set. For those who were not able to see the event in person, Spooktacular was also streamed live on Microsoft Teams with ASL interpretation. Audience members were provided with papers featuring each character’s name and were encouraged to guess who they thought the murderer was.

The play, titled Who Killed Earnest Sommerville, was written and co-directed by Debbie Maher, who attends Flushing Adult Learning Center. It is set in the 1950s and follows the aftermath of the death of a rich old man with an eccentric family. The spooky whodunit, featuring creative touches like a hidden clue in the set design, was punctuated by side-splitting jokes and ended with an unexpected twist. The captivated audience ooh-ed, ahh-ed, and cheered throughout the suspenseful performance.

The mastermind behind the play, Debbie Maher, is no stranger to the theater. During the ADAPTing Reality Play Festival last year, she contributed to three short plays. She also played a major role in the August performance of Shakespeare’s As You Like It, where she came up with the idea for Who Killed Earnest Somerville. Debbie, a longtime fan of murder mysteries, was inspired by the mysteries she always watches on TV around Halloween.

“Debbie referred to mystery novels (her favorite genre) for the structure and character tropes,” Hunter Kaufer said. Hunter, a Theater Specialist at ADAPT Community Network, runs the playwriting class where Debbie first introduced Earnest Somerville. “She astonished the class with the details that seemed to just free flow out of her brain, [such as her] compelling character names (Carla Catskill, Earnest Sommerville, Simon Crimswell, Kitty the Nurse, to name a few). Creative imagery poured out of her each week.”

Though Debbie ran the show, she also took the ideas of her writing team into account when brainstorming for the play.

“I was most impressed with Debbie’s openness to bring collaborators into her story,” Hunter continued. “She would take the ideas of the people in the “Writer’s Room” and find ways to seamlessly incorporate them into the world of her play. I’m honored to witness her process and learn from her in every session.”

After she finished penning the play, it was time for Debbie to assume the role of director along with Theater Specialist Theo Kolbrener. They amassed a team of talented actors and began to rehearse the play in the weeks leading up to Spooktacular.

“I got to experience being on the other side of doing a play,” Debbie said of her directing role. “The teamwork, the behind-the-scenes, the casting. Trying to get everyone in the same place. It’s really a lot of work. It was interesting trying to get everyone in one spot and cooperating. It’s also really hard getting people in wheelchairs not to collide with each other—”

“—which is a little funny,” interjected Lolita Thompson, a fellow producer and Adult Learning Center attendee, with a laugh.

After the rigorous yet fun-filled rehearsals, Debbie and her cast and crew debuted Who Killed Earnest Somerville in a massively successful production to overwhelmingly positive reviews.

“It felt so good seeing my play read out loud,” Debbie said. “The whole cast made it so fun to do. I really enjoyed the experience, and I got a lot of requests to do another mystery. A lot of people told me I should keep writing.”

The play didn’t just impact the audience—it was also an important and inclusive experience for the play’s featured actors and production, like William Branch, who attends Elmwood Adult Learning Center.

“It’s fun, we learn, we are empowered. We discover,” said William of his experience with the play. “It’s the best thing. We have friendships. We learn SO much more. We make the people laugh so they can enjoy and that’s the whole bottom line.”

We can’t wait to see what Debbie comes up with next—and we’re not the only ones.