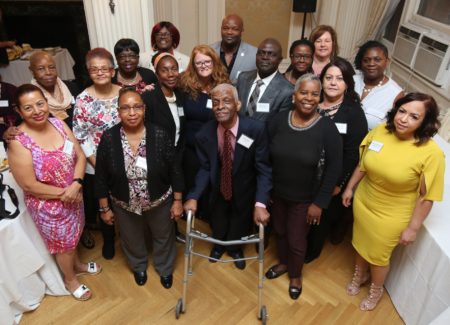 Edward R. Matthews, CEO, ADAPT Community Network noted, “Each of you are here today because of the way your work has positively influenced others and the thousands of people living with disabilities that we support throughout New York City. You have made a tremendous difference in the lives your coworkers and those who we serve.”

“I was a Teacher’s Aide at Staten Island Children’s Program and I loved working with the children and spending time with them!” said Maria Reinel, a recent retiree. “The staff at the program are so kind – I’m fortunate to have learned so much during my time there.”

Another retiree, Eroll Hill, who spent 36 years as a Benefits Assistant in the Human Resources Department, echoed Maria’s comments. “I enjoyed doing my job and the people. I always came to work happy.”

Rosa Reyes, Eroll’s supervisor and Employment Relations Director, added, “Eroll was such a friendly and happy employee. He really enjoyed interacting with those on his team and most of all, he enjoyed his job. This is a nice recognition for people who have invested so many years with our organization.”

“This luncheon gives us a unique opportunity for ADAPT staff and management to come together as an agency to recognize the achievements of both those who have reached the 20 year milestone and retired from here after at least 20 years of service,” noted Isabella Dombrowski, Employment Label Relations Manager and luncheon chair.